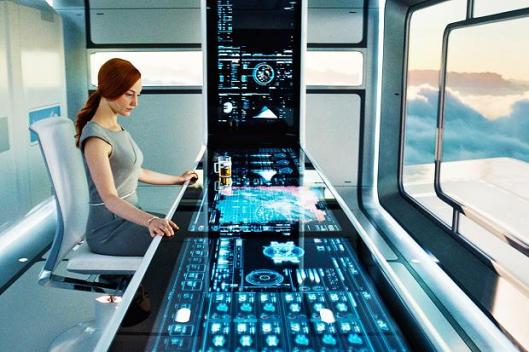 It is 2077. Jack Harper (Cruise) and his work colleague/mistress, Victoria (Riseborough), live in isolation in a communications outpost stilted kilometres above the Earth’s surface. Jack works maintenance on security drones that patrol a barren post- apocalyptic New York and stave off attacks from “Scavs”, an alien race who invaded, after destroying the moon, 60 years ago triggering a series of natural disasters and plunging civilisation under mountains of dirt and dust. Humanity is survived by a colony situated on one of Saturn’s moons in a Borg-meets-Optimus-Prime’s-head space station, known as ‘the tent’ but Jack and Victoria remain on Earth to oversee the collection resources for the survival of the species.

In order to protect their mission in the event of capture by the Scavs (a race that dress like the alien in Predator, AKA ‘Predator’) he and Victoria underwent a mandatory memory wipe that erased their knowledge of anything beyond the past five years. Jack is haunted by dreams – or are they memories? – of a romantic rendezvous atop the Empire State Building with a different beautiful woman (Olga Kureylenko) and this fantasy gives heed to other flights of fancy that Victoria strongly discourages.

Rather than choosing a single influence, as he did with Tron Legacy, Kosinski uses a collage of sci-fi cinema. There are references to 2001, Moon, Prometheus, Tron Legacy, Independence Day, The Matrix, Looper, Wall-E, Predator, Equilibrium, Planet Of The Apes plus (as is the case with most large-scale productions these days) a pinch of Nolan, tossed in like a stigma of saffron to a risotto, giving it a refined taste. The Nolanisation of action epics is becoming a kind of cerebral implant in the collective blockbuster consciousness, with its “HUOOONG! HUOOONG!” sound effects and purposeful yet contemplative leading men. The difference, and Kosinski’s failure, is that Nolan creates self-contained universes that are not cheapened by the pop-culture to which they pay tribute. Jack’s lakeside retreat – a small haven he has made for himself through implausible means – is comically technophobic. Blasting “Ramble On” on an ancient turntable had nowhere near the impact that a cassette of Steppenwolf’s “Magic Carpet Ride” did while launching James Cromwell into warp drive for the first time in Star Trek: First Contact.

Oblivion begs that viewers submit to its logic, but, ironically permits Jack to do the exact opposite for the furtherance of the plot. Its visuals and score are arresting (particularly in an IMAX cinema) but what might have been a political (security state story), environmental (Earth’s exhausted resources story) or humanitarian (refugees are people too) allegory is abandoned and New York is buried with all but baseball and sightseeing as the customs of its legacy.

The most complex player is Andrea Riseborough’s Victoria. As communications officer and romantic interest, Victoria doubly bears the brunt of Jack’s radical decisions whilst liaising exclusively with their commander, Sally (played with a matronly Texan accent by Melissa Leo) and combating feelings of jealousy toward Julia (Olga Kurylenko), whose true relationship to Jack is never called into question, and not even by Julia herself, as the reality of an apocalypse should strike her harder than every other character in the film. Riseborough is captivating and sexy, shining through her painstakingly administrative attire, but Julia’s resilience leaves very little for Kurylenko to work with, she is just a paper-thin fantasy. Cruise is good in apocalyptic/future fiction when under the watch of someone like Spielberg but is a little detached in this, which unfortunately works in favour of the plot, turning like a clothesline and tossing its pegless load to the wind.