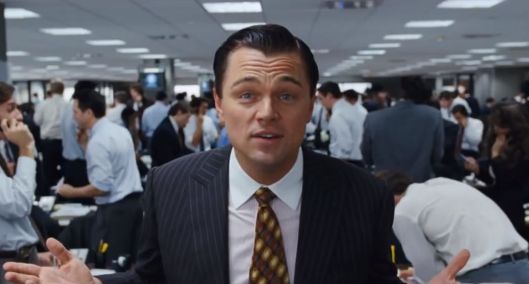 Scorsese delivers, from a screenplay by Terence Winter (of The Sopranos and Boardwalk Empire), a three-hour memoir of stockbroker Jordan Belfort, based on his autobiography. There’s a lot of interest in Belfort’s small helping of justice, remaining a free man where others that he stole from or handed to the FBI have been less fortunate. That being said, the criticism is not of the content of the film, which is mostly comprised of parties, sex, drug use and near-death experiences. Some are angry about what is missing, his comeuppance, the lack of a moral equilibrium. As though we’d expect it from Scorsese, who has spent much of his career endearing us to criminals. If Belfort were dead, these arguments might falter, and yet, is it not his dumb luck that makes his story so thrilling, so nauseating, and so damn fun?

Belfort has more survival stories than could form an entire season of I Shouldn’t Be Alive, and, to be honest, hearing them would be reason enough to see him speak in public. At the 90-minute mark, which is the end of the first act, gearing up for the launch of Stratton Oakmont’s first initial public offering – a lucky chance that designer Steve Madden happened to go to school with Belfort’s business partner Donnie Azoff (Jonah Hill) – Belfort’s climactic speech is one of both Leo’s and Scorsese’s finest scenes. The orgiastic fury of a hyped-up room of stock brokers screaming and flailing on and under their desks, as the camera billows out of Belfort, bungeeing back, capturing the extremes and, to a degree, the eroticism of getting dirty rich. He also impresses upon his team that “there is no nobility in poverty”, but add up these three hours and you’ll find zero or even negative count of nobility in the rich.

Belfort’s first day as a stockbroker on Wall Street saw the crash of ’87. This stroke of bad luck did not follow him, but shows us early on that he, like the risk involved in the stock exchange, is subject to an unpredictable fate, determined by chance. Fate, it would appear, has favoured him. Belfort is a drug addict, womaniser, and thief whose empty pursuits of cash and power can only be sustained on a diet of day-to-day physical highs but he maintains this balance and continues to take pleasure in his addictions, and make loads of money.

Leo is magnificently physical. The young Belfort bursts with naive flourishes of pleasure, as though he had been watching his own films, regressing into former roles. While Di Caprio’s career has been staid by passionate, vibrant or mad characters, Belfort is just a prick, and Leo does well to keep us at a distance, and keep himself at a great physical distance from his fellow actors. Belfort can rile his team to simulate fraternity or community on the sales floor, but he cuts a line straight through them. And his showmanship does not subvert a tortured soul, or sexual dysfunction, or fetishistic habits, mental illness, or an abuse history. We don’t sympathise with him when he throws tantrums in his bedroom, and even the most dire circumstances for Belfort (save one case of attempted kidnapping) are the wildest and funniest scenes in the film. He and Jonah Hill – another fabulous prick (that’s a prosthetic by the way) – writhing on Belfort’s kitchen bench, coiled in phone cords and tripping the “cerebral palsy” phase of a Quaalude overdose is sublime.

In Goodfellas, Scorsese omitted the epilogue of criminal Henry Hill from Nick Pileggi’s Wiseguy. Hill, at the expense of universities and other organisations, would fly all over the US as a public speaker, still making decent money and living under protection of the federal law. The final sentence in Wiseguy describes Henry Hill as “the ultimate gangster” but this accolade was not conveyed in the final scene of Goodfellas.

Belfort isn’t a mid-level gangster, nor does his story represent the 1% of the American self-made ruling class. What he does represent is the indefatigable appetite of free-market capitalism, a system that cannot be heaved or moved by any moral codes, and which has so few legal codes to regulate it. His immunity is his triumph, which is a combination of luck, accident, the same fairy dust/fugazi that McConaughey’s fingers twinkle into nothingness. Making money – for any person – is still going to be a matter of chance, but Belfort’s is a market of chance and he now makes his life work keeping the faith in fortune’s phantoms. By nearly all accounts, he should be dead. If there is a moral lesson, it is simply that we are not learning any moral lessons; we’d still “choose rich every fucking time”.