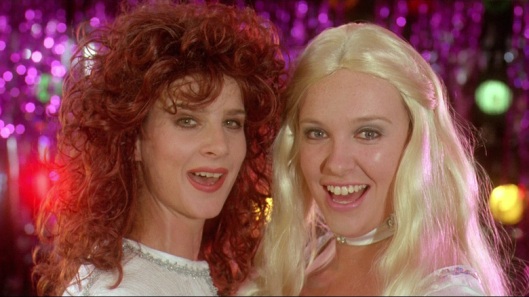 A version of this post originally appeared at theessential.com.au

The nineties are remembered as a time in Australian cinema of camp vibrancy, of colourful, loud films that embraced and celebrated otherness. Along with The Adventures of Priscilla: Queen of the Desert and Strictly Ballroom, Muriel’s Wedding launched the careers of its cast and makers, made us laugh, got us singing and dancing, moved us to tears — plus, they all featured Bill Hunter (he actually filmedPriscilla and Muriel at the same time).

These three “quirky comedies” are grouped together because they were released within two years of each other and they had commendable box office and international success. They also filter Australian culture through a feminine eye and are about performance, singing and dancing, the love of fabulous costumes and gowns, gossip, romance and getting married. All three films were actually written and directed artfully and lovingly by men, but it isMuriel that has a female lead.

Muriel Heslop (Toni Collette) is an unemployed, unmarried, overweight, socially awkward and dishonest 22-year-old with a well-known father in local politics, and a group of pretty friends who think she is cramping their style. She lives at home in the Queensland beach town of Porpoise Spit and has two obsessions: ABBA and getting married. After being arrested for theft, and publicly humiliated, Muriel steals money from her father (Bill Hunter) and takes a holiday to an island resort. There she meets Rhonda (Rachel Griffiths) a freewheeling, outspoken, and adventurous girl who attended the same high school as Muriel. Rhonda defends her, she loves ABBA, they dance to “Waterloo”, sing to “Fernando” and become instant friends. Muriel runs off to Sydney to live with Rhonda, and the two reinvent themselves. It is not long, however, before her past catches up with her, and when Rhonda is suddenly diagnosed with cancer, Muriel can’t cope and retreats back into her obsession with weddings.

P.J. Hogan’s superb script is one of well-structured satire. Tania Degano and her chorus of twit friends are mean and thoughtless to shy, odd Muriel, but that cruelty offers the film’s finest comic dialogue, and also a diving board for Rhonda’s triumphant shut-downs.

The characters all have their own moments of habitual oddity, and they are all charming. Betty (Jeanie Drynan) makes tea by putting a tea bag in a cup of water and placing in a microwave. Perry (Dan Wyllie) kicks an empty carton of milk around, while commentating an AFL grand final of which he is the champion.

The film is also devastating. Watching Muriel fill an album with Polaroids upon Polaroids of potential wedding dresses is immensely sad and then there’s Betty, whose confusion and inattention slowly unravel into a mental breakdown. Hogan is able to switch from colourful comedy, to deathly sterility with care. He loves his subjects, even Muriel’s despicable father, Bill Heslop, earns our sympathy when looking out over his barren, smoking backyard, which Betty set on fire before taking her own life.

Hogan’s magnificent ending sets Muriel aside from its contemporaries. It combines the journey of Priscilla with the coming-of-age quality of Strictly Ballroom in a famous reversal of James Stewart’s excited return to his hometown in It’s a Wonderful Life. Here, the girls bid farewell to the hideous, “progressive” structures that men like Muriel’s father have littered the beachfront with, while ABBA’s disco hit “Dancing Queen” carries them out of Porpoise Spit forever. What is so special about Muriel’s Wedding is that the women rescue each other and manage to find a happy ending despite being broke, paralysed and divorced with no career prospects or romantic interests. Muriel and Rhonda are, to this date, unrivalled as the freest women in Australian cinema.