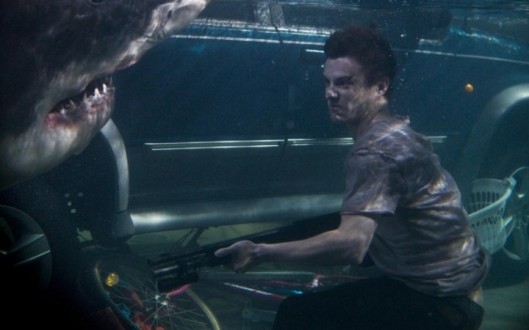 A devastating tsunami – filled with sharks – hits coastal Queensland just as an escalating armed-robbery is taking place at a beachfront supermarket. The water hits, drowning, maiming and trapping the surviving shoppers and staff in two separate fish tanks. A downtrodden shelf-stacker, his ex-fiancé, her new flame, a cop, his daughter, her boyfriend, his boss, a masked assailant, Julian McMahon, two yuppies and a Pomeranian would seem a great collective for a murder mystery – but, no, Hercule – the shark did it, in aisle 3… with its teeth.

Australia has championed the crocodile film on both an indie (Rogue) and commercial (Crocodile Dundee) level but it is surprising that we haven’t attempted a shark horror that takes itself seriously. Swimmers and surfers all over the world are still recovering from Jaws 40 years on and the thrill of good horror is always a great incentive to spend the night at the movies. Bait 3D, however, is a “popcorn movie” and so we are to accept that its likeness to the abominable Snakes On A Plane or Piranha 3D is intentional.

Saving Dan Wyllie’s deranged criminal – whose speech has a laconic dereliction that is so unashamedly Australian, everything he says is hilarious – the cast are a bit too ordinary, grappling with strange attempts at American accents. Unlike this week’s other Australian release, Lore, in which nationality is a powerful component of each character’s being, Bait’s Oz-American confusion seems less a parody of B-grade American films and more a reluctance to parody itself. Perhaps the cast of Housos should have been the armed robbers? Or perhaps it was the shark’s fault? Considering it is the embodiment of the danger and suspense in the film, it could not be a less interesting rendering of a truly frightful fish, bumping around and rarely eating anyone – the shark has no arc.

Plunging the entire supermarket under water decrees it a useless a setting for this proudly B-grade film. Similarly, the 3D aspect is not employed with any flair, and is another superfluous distraction from the absent story and the vacuous personalities of its TV stars. The end product seems full of producer’s apprehensions about rating (6 years and up), formatting (3D films cost more to attend), casting (may attract fans of Charmed) and confrontation with its only plausible element: a tsunami. The only thing it seems to get right is the title.