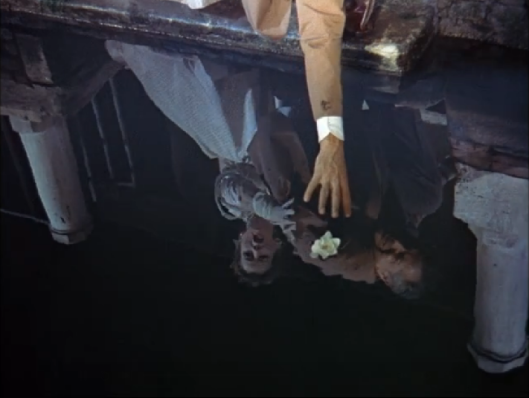 Before David Lean was to give new meaning to the word “epic”, the term could easily be ascribed to the love relationships that blossomed full and passionate within his frame. In Summertime, his last film before his triad of wartime sagas, love and sex become a relative warzone for a middle-aged spinster, Jane Hudson (Katharine Hepburn) while holidaying in Venice, Italy.

A film of few characters (based on the play The Time of the Cuckoo by Arthur Laurents), the recurrence of a delicate gardenia, to symbolise their fleeting, floating, wilting romance carries with it limitless possibilities in terms of its representing several characteristics of Miss Hudson herself.

Her lover, Renato Di Rossi (Rossano Brazzi) asks her to choose a flower from the basket of an elderly merchant who cradles a bountiful bouquet across the Piazza San Marco. Jane selects the gardenia to fulfill a girlish fantasy of wearing one to a ball when she was a teenager. She is uncertain, when recalling this wanting of a gardenia, as to the reason for that particular flower. It had to be a gardenia, and she didn’t get it, and still feels this disappointment.

Here we see the flower represents her dissatisfaction with her life and her choices, and the little control that she has over the dreams that are fashioned by her desire. Why the gardenia? Why a rich handsome husband and children? Why Venice? Jane, on arriving with Venice, has acknowledged that her dreams, many of them behind her, are unrealistic. So when she finally gets her gardenia, her romance with Renato, she can only be disappointed by its guise or its eluding her all these years.

Jane accidentally lets slip the flower from her fingers, into the canal. Renato tries to reach it from the stone embankment, but the flower floats away, in a floating city. Jane is hurt again by the unattainable gardenia, but it is in fact its symbolism that drifted from her. She now has Renato.

The gardenia is both a symbol of and a distraction from Jane’s virginity. The metaphor, if seen as metaphor, is easily discernable but it is also the 1950s, and the nature of a woman’s sex life, particularly that of a woman over 40, must be supplanted with beautiful objects. Blanche DuBois, who is often described as a fragile, faded or wilted flower is scarcely remembered as a woman.

There are distinctions between romance and sex, but what exactly it is that Jane wants and what she expects is not always a secret we are privy to. Sex is plain and enormous in Summertime, a shared secret that everyone in Venice is in on. When Jane and Renato have sex, it’s epic. The film’s climax is climax; fireworks flourishing and bursting in the night sky.

The resemblance between Hepburn and the flower is unmistakable. Her dresses frill about her stem legs, and her blouses climb and bend up her slender neck. She wears white, country gowns, decorated like a debutant attending a farm dance. She screams virginity, as if an attempt to conceal it would make her look foolish. She stands idyll by the water, she drinks in the sunshine, she and the gardenia both fall accidentally into the canal, and they both float. Jane and the gardenia also share a foreignness to Italy; she, an American, and the flower native to Oceania, Asia, and a group of countries less often referred to as Australasia.

It is the film’s final scene when Renato again presents her with a gardenia. After a whirlwind romance, Jane decides that it is time to depart and return to her ordinary, lonely life. The decision doesn’t translate to the modern woman, who might seize this newfound love and live it out in all its romantic potential. Jane still does not believe herself to belong to Italy and remains a woman out of sorts with the open love that she associates with Venice. She boards a departing train, looking longingly for Renato who she hopes will see her off. The train departs, and she sees him running toward her. He carries a small box in his hand, extending his reach as he runs to meet her carriage. Jane reaches as well, but the platform ends and Renato stops. Jane the gardenia was always unreachable to him. He lifts from the box a delicate, white gardenia, holding it high in a love salute. Jane sighs gratefully and waves goodbye.