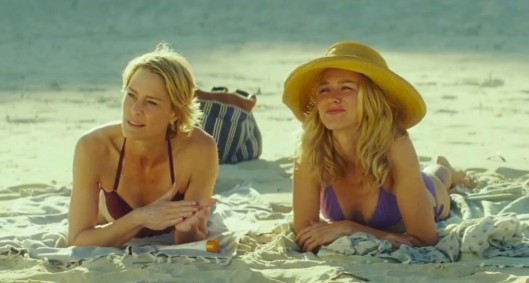 Set in beachfront condos, somewhere north of Sydney, Adoration is about the years shared between two women, Lil (Naomi Watts) and Ros (Robin Wright) and their love relationships with each other’s teenage sons, Tom (James Frecheville of Animal Kingdom) and Ian (Xavier Samuel). It is based on the late Doris Lessing’s The Grandmothers, part of a short story collection published in 2003.

Lil and Ros are beautiful, fit and foolish women approaching middle age who have lived as neighbours and friends since they were children. They are both creatures of habit, and one shift here or there, usually the interference of men, must be smoothed out, regulated and habituated. They are anchored to their lifestyle, like the buoyant wooden raft that they spend long idyll hours lying about on. Men cannot compete with the bond of these life-long friends. Sons of course are privileged, as they exist in their mothers’ reflections, “did we do that?” asks Ros, marvelling at Ian and Tom’s physique, “they’re like Gods” she replies.

As in a high school movie (Tom and Ian just out of high school) the four of them get drunk one night and Ian makes a move on Ros. Tom, in what is the most interesting moment in the film, decides out of jealousy, hurt, licence or curiosity, we can’t be certain, that he should do the same with Lil. The next day they are all honest about it, and it is no longer taboo. After the initial surprise, the affairs become habit, relationships, until Ros’ son Tom (Lil’s lover) becomes infatuated with a woman his age and Ros decides she too should end it with Ian.

The film relies on some suspense about them being caught out by Ros’ husband Harold (Ben Mendelsohn) or the guy trying to court Lil, but Harold conveniently takes a job in Sydney and the latter decides for himself that Lil and Ros are lesbians. The women have little to say on the subject of their romance. They laugh. They use words like ‘happy’ to describe the experience. We can see plainly their interactions with men, but this great friendship that is the most important of the film, is lived out mostly in wide angles, where their frames are miniature, and their conversation inaudible.

Both Wright and Watts do an exceptional job of appearing bewildered, and much of the dialogue is bewildering. Watts’ use of the word “bloke” is less the Luxembourg-born director Anne Fontaine’s attempt at Australian authenticity and more a reminder of how foreign men are to Lil. Ros similarly refers to her husband by his name, ‘Harold’, so often that it was as though she were meeting him for the first time in each of their scenes together.

Adoration does touch on a potentially lesbian relationship that can’t express itself sexually. The boys inherit the love that their mother’s have for one another, and it is natural that they, in turn, would develop love feelings for these surrogates. It is also natural that Lil and Ros, not being lesbians, should be able to take each other’s handsome young male counterparts to consummate their love. For Lil, Ros and their sons, trying to live within any singular definition of love or desire or sex will end it. This all screams at you for the film’s duration, but it isn’t carried off to any performative effect. The lovers all speak in turn; the criss-cross of the love affair is never mirrored in drama. Watts’ big confessional monologue is given to no one – Wright sits listening, motionless in split dioptre on the edge of the screen.