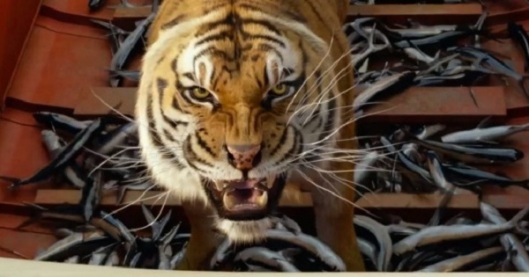 Life Of Pi begins in a zoo, with the candid images of its inhabitants climbing trees, eating, napping, flirting. Initially, each colourful creature is flesh and blood, but a large CGI elephant lumbers into frame, followed by an ape so magnificent looking, it couldn’t be real, then another digital creation – or, maybe, it is real? Were any of them? Real or not, they’re exquisite.

Pi (Irrfan Khan) recalls his survival story to a journalist (Rafe Spall) looking to write it. He begins with his childhood, his unusual namesake and how he to came to believe in God(s). For Pi, spirituality and ritual are exponential and secure in this belief, he is able to live within the customs of multiple faiths at once, becoming a Hindu-Muslim-Catholic, uninterested in a singular religious “truth”.

His family decide to migrate their zoo from India to the United States via ocean liner. A storm hits, and the ship is sunk. After a traumatic sequence of events unfolds between Pi and the other survivors on a life raft, he awakens to a sea so still that it mirrors the sky. The horizon is indiscernible were it not for the upright position of the raft in the water, and he is met with a ferocious Bengal tiger. The tiger’s name is Richard Parker, a human name given him by mistake. Although we can see that this is a post-production creation, there hasn’t been such a realised carnivore since Spielberg’s velociraptor in Jurassic Park. Audiences will be divided between the drama, and the spectacle of just how close digital animation has come to creating life.

Where 3D technology has done little to enhance anything outside of Avatar, it is part and parcel to Pi’s intrinsic ideas about perception and reality. It is used to astonishing effect in a deeply spiritual scene where Pi looks into the mouth of the universe, where the water and sky blend into a tunnel of imagery that rushes and blooms onscreen.

The journalist is a troublesome but necessary component to Pi’s story that undoes Pi’s analogy with a single, delineating sentence. He speaks for the audience, which is unfair, but reinforces to us that the film has such a sumptuous symbolic trajectory that it does it little justice to yield a single truth from it. The result is something like Jonathon Glazer’s Birth. Pi’s fear conjures an existence within which he can survive, as Kidman’s grief gives birth to the ghost of her lost love. Where the ocean represents pre-existence, the sky opens up to the afterlife, and where Kidman stands devastated in the surf, Pi’s life begins again on the shore.

Life Of Pi is a picturesque production of cinematic rhetoric. Recent work from Kiarostami and Leos Carax’ Holy Motors explore much of the same meditations on truth and cinema. It also uses a principle of Kubrick’s Eyes Wide Shut: that the truth lies in the telling. Though its alchemy won’t turn atheists to Catholics, it speaks volumes on the human experience using the same mirror tricks that have historically furnished the cinema in its simulacrum­ purpose, the imitation of life.