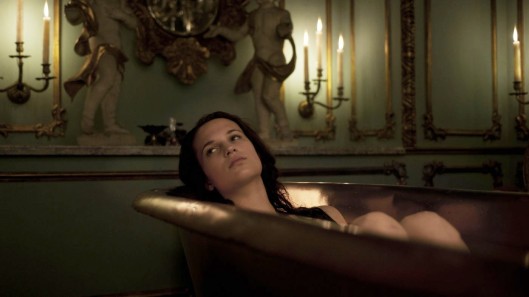 Caroline Mathilde is Queen of Denmark (Alicia Vikander), married to the eccentric King Cristian VII (Mikkel Boe Folsgaard). Depressed and bored with her husband, she forms a friendship with his newly appointed physician, Dr. Johann Struensee (the always pleasing Mads Mikkelsen)  – the two fall in love and together use their influence with the King to liberate Denmark.

A Royal Affairis an historical film but its historical accuracy is almost irrelevant because its urgency, its present significance, is overwhelming. Upon exiting the screening, your thoughts are just as likely to be with Julian Assange as with 18th century Danish summer-wear.

It is also, but not merely, a costume drama, centred on a forbidden affair between two passionate individuals, who come to love each other by sharing literature and ideas. The romance is achingly familiar, always blossoming in a sensuous traditional dance at a masquerade or ball – recall Maria blushing in The Sound Of Music or several instances in Jane Austen adaptations. The young Vikander is excellent as the queen – shy or indifferent or sensitive or cold or seductive or courageous – it’s an immense role and one that is a little flusher than you’d expect for a first major performance.

The film is captured beautifully, but framed in a way that, like its romance, is an exercise is costume drama production. This is not tedious, it is a device, and it is used in several different ways to wrap you in this romanticised era. The obvious comparison is Amadeusand only because the characterisation of King Cristian VII is much like Tom Hulce’s Mozart – funnier, because he is a consistent buffoon, and not a musical genius. Many of the dining room scenes brought Danish dogme film Festento mind. It may just be a very Danish thing to make awkward announcements at the dinner table?

Not often do audiences seek escape in elaborate period romance to find themselves amidst a reflection of the political/corporate hierarchies of the greater West. It is precisely this significance to now that this film resonates and opens itself up so we might reach right into it and become miscellaneous spectators at the gallows. It calls out to all our desires for the luxury of royalty, of intellectual romance, of the power to change the world, to control and manipulate the weak, to be rich and also compassionate, but almost throws this fantasy back in our faces. The historical accuracy is in its political frankness – which is so bold and refreshing.